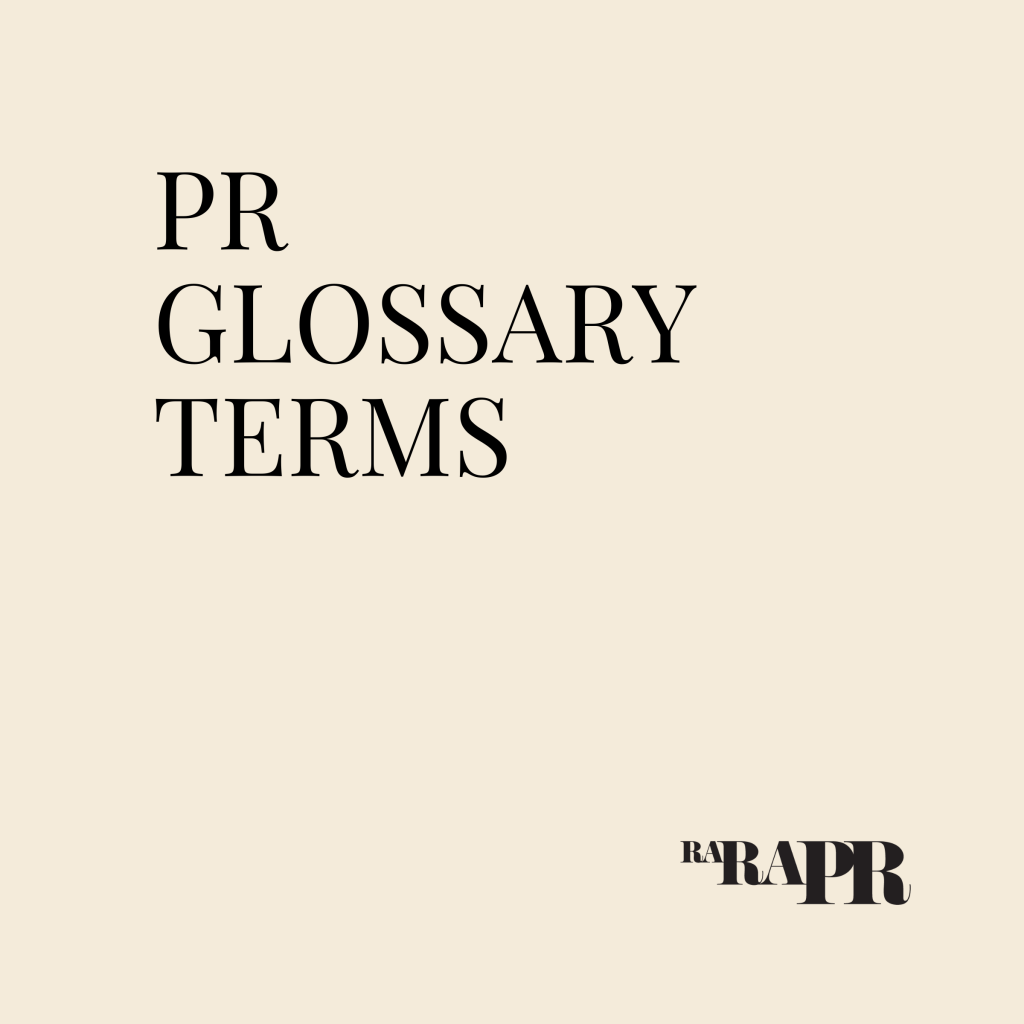 > This blog is part of a six part series on all things PR Glossary Terms. Get around it if

Strategy: A very masculine word for approach. Or a word that describes creating a plan to reach goals and ideal outcomes. Let it be known, that if you drop the word ‘strategy’ into a sentence your idea will be taken more seriously.

Seeding: Planting an idea (‘scuse the pun) with the media for them to mull. The editor or journalist will develop an opinion on the idea and potentially support/write about/publish your story idea.

Concepting: An ad agency and PR agency term for; strategic idea generation which will lead clients to their ideal outcomes. i.e. “I’m busy concepting and unavailable”.

Ideation: A fairly new word, which may or may not have reached the Oxford Dictionary. The definition of ideation is ‘idea creation’. Many agencies will charge for the service of strategic ideation.

Range Showings: Convert a space, display your product and invite the media. The intention of this PR strategy is to build relationships with key media and ideally lead to coverage. A bit like a trade show but a media version (no public access) and usually for one or just a few brands at once.

Special Events: No different to the meaning of an ordinary ‘event’. Although managed by someone in the PR or event management industry and definitely not ordinary.

Media Release: Written communication via an online or printed document, which informs media outlets as well as editors and journalists about a statement, announcement, new research or a story opportunity. Media releases should be fact and centred around news.

Media Alert: A shorter version of a media release. A one-page announcement about a newsworthy and impending coverage opportunity. Specific, brief and a must know. Spam alerts and you’ll get black listed by media pretty quickly. As with all media comms these are sent thoughtfully and strategically.

Press Release: An out-dated term which relates to syndicating information to press media only (news outlets).

Media Call: A news and content opportunity for multiple media at the same time via a special media activation. A media call is not for press but for media outside of the press category (aka: lifestyle and fashion media might be invited to a media call).

Press Conference: A news and content opportunity for media in the press (aka: legit news media).

Media briefing: Supporting your client with tools to manage and speak to the media in an interview scenario.

Publicity stunt: An experiential, one-off planned event designed to get the public’s attention (and the media’s), ultimately driving publicity. The result is not guaranteed; making it an experiment and experience based exhibit of sorts.

Media junket: Sponsored media and press trips. Travel and film media are often invited on or to a media junket, or a media tour. A media junket is usually multiple media events for one particular story or campaign.

Early Adopters: Influencers and people who are quick to start using something as soon as it becomes available. Early adopters know about pop-culture trends, what’s cool, where to go, the latest and greatest before it reaches the masses.

>>READ ON FOR PART FIVE AND SIX OF THIS SERIES.